The Role of Creative Play in Mathematics

Some recent events triggered a depressive episode. For the past week, I’ve been feeling helpless and overwhelmed. I admit that I started losing some hope that things would improve. Luckily, I had a math dream! I think it was my brain’s way of cheering me up.

I decided that it would be nice to write up about the mathematics that I’m good at. What I really enjoy. In exploring that idea, I realized that I had much more to say. Mostly around the role of creative play and imagination in mathematics.

A Love of Algebra

Yeah, it’s algebra which has really captured my heart. It’s what makes sense to my brain. I get a little miffed that we often focus on geometry when we talk about the beauty of mathematics. That doesn’t resonate with me as much.

I like equations. My favorites being Maxwell’s Equations of Electromagnetism. I think it’s incredible that these equations represent a whole domain of knowledge. They convey complexity. It just makes my brain light up when I see them. In fact, I am planning on getting a tattoo of the notation for the surface integral.

This makes a lot of sense looking back on my history. I discovered my love of math when I figured out that letters could represent numbers. This conception is not a simple one to comprehend. I know a lot of folks who got stuck on algebra. It adds a layer of abstraction. Not everyone is comfortable with that. I gravitate towards it. It’s easier for me to think of that symbolic representation in an equation than it is to think of actual numerical value.

What really made algebra come alive for me was learning about Galois. He is another mathematician overshadowed by his scandal. Which I am not going to go into here. Unfortunately, I can’t get into serious mathematics. I haven’t advanced far enough in math. What I do know is this, he made important discoveries specific to algebra. This expanded my mind about what algebra is and could be. I realized it is something to study outright. A living breathing entity that we are still learning about.

I was a lonely kid. The kids at school didn’t like me. At home,  I spent much of my time in my room. I needed ways to entertain myself that didn’t involve others. Math was a great outlet for that! I liked making up my own games. This type of creative play came naturally to me.

I made up two games which both relied on the fact that letters could represent numbers.

In the first, I would assign numerical values of numbers to letters. I would then add up the value of words and compare them. 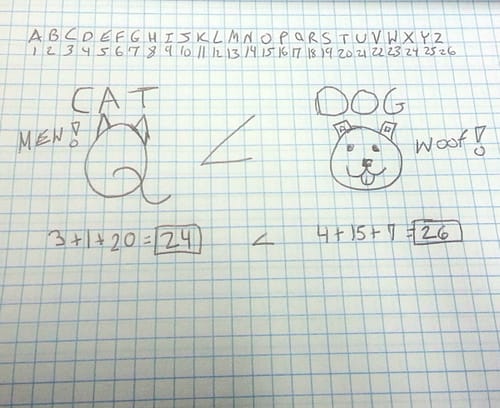 The other was a game of logic. I would write down random equations of addition, subtraction, and multiplication. I would leave one value missing so that I would have to logically guess what number would make the equation true.

I was so set when I learned pre-algebra in 8th grade. I had been solving for values of x for years at that point. It is the first time that I really felt competent in mathematics. Years of creative play with mathematics paid off. All my work was validated.

The Importance of Creative Play in Mathematics

I think making time for play is an important part of learning any craft. I hear this all the time on Youtube in the beauty community when they are talking about using new makeup. You gotta try out your skills if you are going to do anything creative with them.

Perhaps a better example is the sorts of exercises I do to keep up my writing.

While I was in my room playing silly games, I was also creatively using my skills and using my imagination to think of new ways to apply the knowledge that I had learned.

Here are some important consequences.

I’ve talked about how books served as an escape from my traumatic childhood. It wasn’t just reading about the characters that helped. Nor was it just their morals. It was the use of my imagination that really saved me. Through these books, I could imagine what a better life would look like. That gave me hope.

I think, too, that using my imagination will also help me get through this dark time. I know that these things don’t last. That I can hold on to the love and light of my friends and family. I can see a future where things are different and that brings me comfort for now.

Come dream up amazing videos about the very latest in science and math. I can't stress enough how cool this job is. Share! Apply!