I love mathematical themed gifts. I’ve decorated my home in posters, toys, and other elements that reflect my interest in mathematics. In a series of posts, I’m going to chronicle the stores that I frequent to add to my collection.

Today, I am chatting with Nicole Dick of the Etsy store Nausicaa Distribution. I stumbled upon her store looking from some geek-themed cross stitch patterns. I found a great one in her “Significantly Not Normal Cross-Stitch Pattern.” 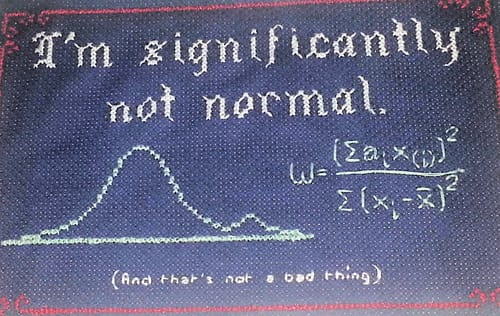 You can purchase this pattern here.

I was a little nervous and humbled when Nicole accepted my request for an interview. I asked Nicole some questions and her are her answers. You can visit her Etsy Store Nausicaa Distribution!

1. Why did you decide to open up a shop on Etsy?

I’ve always liked to sew and I’ve always liked math. My husband (a statistician) doesn’t sew but has good ideas. He asked me one day if I could make a little plush toy shaped like a Normal distribution. So I spent the evening trying. We both thought it was pretty cute, discussed what would make him better and then tried again. I honestly don’t know if my husband’s plan all along was to get me selling on Etsy, but we decided to take some pictures and list it. If it sold, I’d make more of other distributions. If it didn’t, well that was okay.

In about 2 weeks, it sold! So, I made another few as well as some t-distributions and they sold 3 days later. It just kept going from there.

2. Is there a meaning or interesting story about the name of your shop? i.e How did you come up with the name?

My initials are ND (Nicole Dick) so my shop has the same initials.

As a teen, I used the name Nausicaa for my internet presence and we know that statistics is all about distributions. So we put the two together and made Nausicaa Distribution. I will say, it is hard to pronounce, but it is also unique!

3. What inspires the items you make?

Kind of what I mentioned in the first question. I like to sew. Now that I have kids, I think that inspires me as well, what do they find cute? What would they wear? What do I want to hang up in their room?

Aside from that, I really like to make things that have smart-humor. Not just some joke about sqrt(-1) being I or things like that. But humor you have to know a little bit about to get (my favorite is the MCMC hammer cross-stitch, inspired by my Masters report).

4. What moves you emotionally about mathematics and statistics?

I like math. It has formal rules but also allows for creativity and some rethinking of the rules. I like that math can be functional and fun. I really like that statistics is math with a solid purpose. Statistics is a way to find truth in data. Even simple methods can hold a lot of power.

I (Suzza) wrote a piece on a similar line about how community managers could use descriptive statistics in their work.

5. When did you know that you wanted to go into mathematics?

I had always been good at math in school, so I just kept taking classes. Then college came and I just kept taking classes. My junior year I realized a BA in math wasn’t going to get me very far financially, so I added on a BS in Secondary Education. My goal was to get a Masters in Adult Education and teach at a juco. Well, the program I was going to get into ended and a job at a nearby middle school came up, so I took it. After 2 years, I knew that I was not made to be a middle school teacher.

My husband had just finished his Masters in Statistics and told me I would like it. So I tried it.

And he was right. I liked it a lot!

6. What is the most rewarding part of being a math instructor?

It’s the same thing any teacher says, when you see a student actually get it, that is SO rewarding. I’ve had a few outstanding students at the community college I work at and I love the challenge they bring to class for me. They get the material and then ask great questions. We were discussing volumes of solids of revolution. When the axis of rotation shifts from the x/y axis, you have to modify your integral to deal with it. One student sat there after a few days of thinking and doing, and set “Can’t we just transform the function so we don’t have to rethink the integral?” I thought for a bit, and jumped up and down inside, then we discussed how that would work. It was an excellent discussion.

You can read about my(Suzza) favorite mathematician G.H Hardy.

7. How is your family involved with the store?

My husband is half the ideas and the photographer and the description writer. My kids were models, but I need to take some new pictures. My oldest is 8 now and she has a chart set up for her job of getting paid to stuff plushies.

8. Do you have an interesting story to share about your time on Etsy?

I’ve had some fun sales. I made a plushie that looked like Stephen Colbert, and over a dozen custom plushies for Facebook. But the coolest thing I ever did was ship an ABC poster to CERN, in Geneva!

9. When did you know your store was becoming popular?

I’d say May 2011. Graduation time hit and I could not keep up with the orders. I don’t remember what link it was, but something awesome hit and by shopped boomed. This past Christmas was the first time I had a “slow” season since May 2011, and that is because I chose to. I keep my listing low and hung out like crazy with my family.

Let’s give a round of applause to Nicole for granting this interview! I am very humbled that she took the time to answer all these questions. Crafts are just one fun way to express our feelings about mathematics.

You may also like my interview with Life Through a Mathematician’s Eyes.